A primary project goal in designing the master plan for Southlake Town Square was the creation of a development oriented to the pedestrian that would foster a sense of community for a city whose only commercial development at the time consisted of several strip centers, pad site restaurants and one big box retailer. Bringing a mix of uses to the site in close proximity to each other was identified as important to reinforcing Town Square as Southlake’s downtown, as was successfully accommodating cars without negatively impacting the pedestrian experience, given that most people coming to Town Center would arrive via automobile.

The basis for the master plan is a modified grid pattern. The grid plans of such towns as Charleston, South Carolina; Savannah, Georgia; and Annapolis, Maryland, were studied. Like many American towns, Town Square’s grid is modified to adapt to its specific site characteristics. The two primary east–west roads bordering the site, East Southlake Boulevard to the south, and State Highway 114 to the north, are not parallel. In order to achieve regular shaped blocks that front onto each of these roads, the street grid is shifted on the interior of the site. The grid plan accommodates three parks of differing characters. The largest is 6 acres, and is located on the steepest portion of the site -- an area with the best stand of existing live oaks -- which would have been expensive to develop.

In fixing the block sizes for Town Square, it was important to develop a block dimension that was small enough to relate to the pedestrian, yet large enough to allow for future parking garages. To successfully meet current and future parking demands, we developed a series of “A” and “B” streets. “A” streets define larger “super blocks” that are large enough to contain parking garages, while the “B” streets break the “super blocks” into a series of smaller, pedestrian-sized blocks, and provide access to the parking areas at the center of blocks. As the project has expanded and the demand for parking increased, the existing center-of-the-block parking is being progressively replaced with parking garages, doubling the available parking spaces. The height of the parking decks will not exceed the roofline of the buildings. 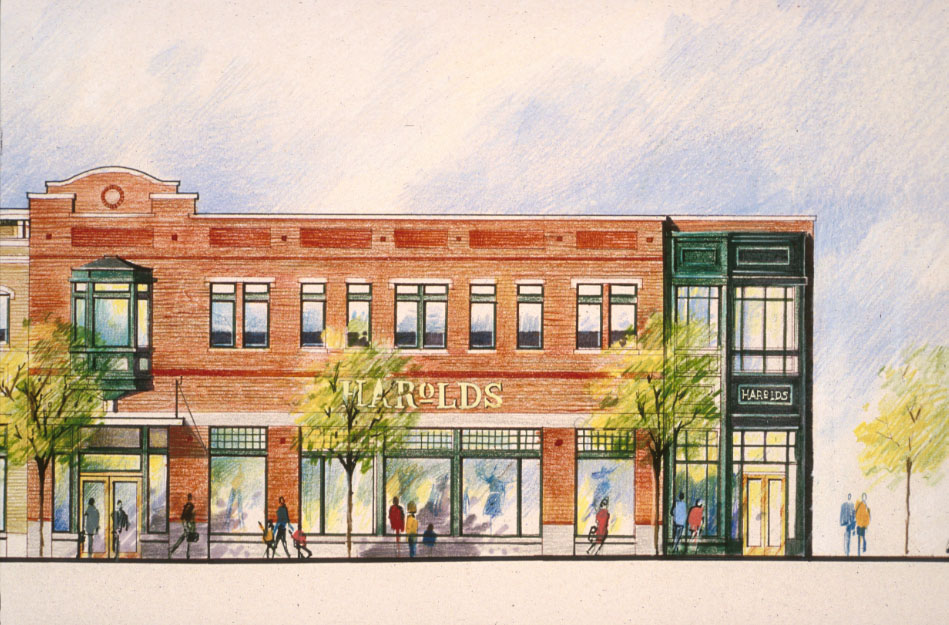 The traditional American “Main Street” served as the model for the urban spaces of Southlake Town Square. A new zoning code was written as part of the master plan in order to accommodate the “Main Street” goals. Two of the most important aspects of the new code were to permit buildings to have zero-setback from the sidewalk, and to allow for on-street parking; both are important factors in creating a pedestrian-friendly environment. Town Center’s shop windows and building entrances front directly onto the sidewalk, and are not separated from it by deep setbacks and landscape treatments, as was required by the existing zoning code. Parked cars act as a natural barrier between pedestrians and moving traffic. Street trees, period street lamps, and benches further articulate the sidewalk edges.

A 200’ x 200’ public square creates a focus for the entire master plan. It is flanked on the east and west by retail and office buildings, to the south by an open block with a pond and bandstand, and to the north by a new Southlake Town Hall and Library, which was completed in 2000. The public square functions as both a formal town park as well as a place to host community events.

The office and retail buildings around the Square are all designed as two story structures with office space on the second floor and shops and restaurants at street level. Each block is designed as a single building, with a common office lobby and core, but with multiple façade treatments that are stylistically varied and which break down the scale of the building exteriors. Façade treatments vary in width from 25’ to 100’ in multiples of 25’ that correspond to the buildings’ structural grid. Exterior materials consist of brick, stone, cast stone, and synthetic stucco. Exposed roof areas are covered in copper or synthetic slate. Corbelled and polychromed brickwork, oriel windows, corner turrets, show windows, canopies, awnings and signage are variously employed to create the fine layer of detail so characteristic of the traditional American Main Street. Strength of Planning Over Time

The project has demonstrated the flexibility of the original master plan through the successful build-out of several phases of development. After the completion of Phase 1 in 1999, the Town Hall and Library opened in 2000 and further retail expansion along Main Street ensued. In the four years following the opening of Phase 1, additional individual retail and office structures were built and Grand Avenue, the largest single phase since Southlake Town Square’s opening, opened in 2006. Also in 2006, the Brownstones at Southlake were completed, bringing the first residential uses to the neighborhood. In late 2013, Del Frisco's Grille opened, followed by the development’s first grocery store – Trader Joe’s – in 2015. Work continues as The Parkview Condos (the first multi-family development ever approved in the history of Southlake, TX), Garden District Brownstones and other retail additions are all in various stages of design and construction.